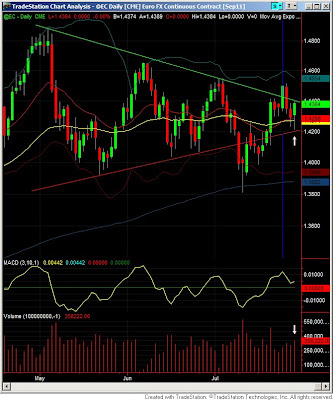 Euro printed a higher relative volume hammer-like candle. This suggests that the last 2 days were a retracement and it is ready to move higher. If it breaks out of the triangle consolidation and closes above the recent resistance levels of 1.4500, then the likely upside target, using the triangle consolidation's range on the wide opening, is around 1.5430, which is around 1050 ticks from today's close.
Posted by Shuaib Arshad at 3:00 AM 6 comments: 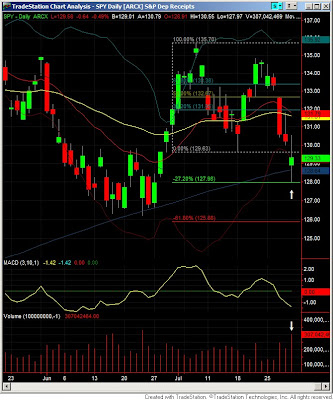 Market (SPY) printed a higher relative volume spinning top candle today. On Emini S&P (ES) futures chart, the candle looks hammer-like when you consider the overnight session which includes Asian and European trading. The Low of this hammer tested the drawn 127% fibonacci extension to the tick. Also the price bounced off the 200 day SMA (lower blue curve), and this price region was the support area during June.
My interpretation of this candle is that higher volume points to important support here. I expect the price to bounce from here. Now this bounce can be just a retracement and last a few days or it can be a reversal. Another possibility is that price hangs out here for a while before deciding which way to move next. And the third possibility is that price can just rip through this support completing the widely mentioned head and shoulders pattern and drop hard, though the likelihood of that happening is less than the two scenarios mentioned earlier, again that is pointed to be the volume and candle type. Also when everyone is talking about a head and shoulders pattern, its chances of materializing decrease.
Moreover, NASDAQ 100 (QQQ) printed a higher relative volume inverted hammer which again signals a bounce and it closed higher than 2 previous swing lows. As I mentioned in previous posts, this is most likely because 4 (AAPL, GOOG, MSFT, AMZN) of the 10 highest weightage stocks in the index are in strong uptrend.
Considering a broader perspective, the weekly candle hints at continuing down move, though it closed off the lows. Since, the month is also over, the monthly candle is a lower relative volume inverted hammer-like, which followed a higher volume hammer. This combination suggests higher chances of reversal than continuation to the down side.
Posted by Shuaib Arshad at 2:12 AM No comments: 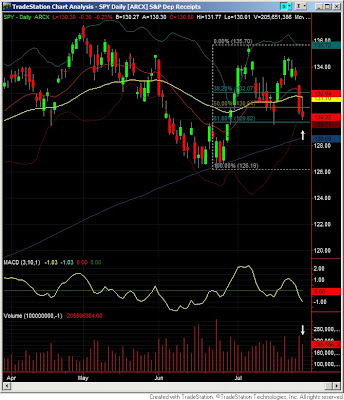 So, today market printed lower volume inverted hammer candle. Intraday, market direction was up until 12PM Eastern and then it spent the rest of the day giving it all back and then some more. Over all it was more of a day of rest after yesterday's high volume wide range decline day.
In my experience, an inverted hammer during a down swing can signal a reversal but for that to happen, the volume has to be higher than previous day. That is not the case here. But this doesn't mean that we cannot get a reversal as market is at the confluence of 61.8% fib retracement and lower Bollinger band while 200 day SMA is 1.5 points away. These are likely to provide some support.
Posted by Shuaib Arshad at 2:19 PM 1 comment: 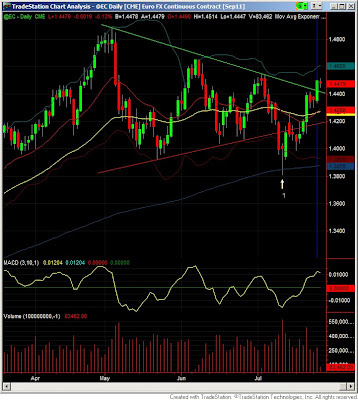 This is daily chart of Euro futures contract. I use futures chart instead of spot EUR/USD as it provides volume information which I use in my analysis. Euro had been consolidating in a symmetric triangle from start of May. On July 11, it broke below the lower trendline of the consolidation on higher volume. It appeared that finally there is a resolution from the consolidation. But Euro likes fooling traders a lot, and that happens on every timeframe. The next candle marked '1' on the chart was a higher volume hammer, with a tiny body a looooong lower wick. This was a clear hint that it is in no mood of going down for now. During next few sessions it crept back into the triangle, and then boom!, it ripped through it and now has broken out of the upper trendline. I am writing this post to commit a lesson to memory: don't overlook such clear hints or you'll pay the price (which I did).
Posted by Shuaib Arshad at 2:24 AM No comments: 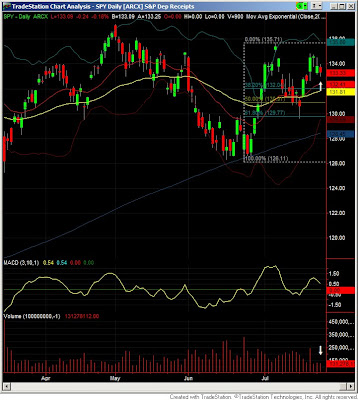 Market continues to be in sideways consolidation. We had a low volume spinning top like day, as the wicks were too small. This type of candle doesn't really hint at anything. Intra-day, current support on SPY is at 133, which has been tested thrice during last 4 trading days. The likelihood of it holding is decreasing with every test. Next support levels seem to be around 131.50, 130 and then 126.50. On the other side, next resistance level is at 134.80.
QQQ reached new bull market highs a couple of days ago, probably because of the higher percentage weight of tech stocks like AAPL which is ripping higher post-earnings. QQQ's breakout was on anemic volume, so that really doesn't count.
Historically the longer market stays within the trading range, the bigger the move that follows. So, we need to be patient.
Posted by Shuaib Arshad at 1:55 AM 1 comment: 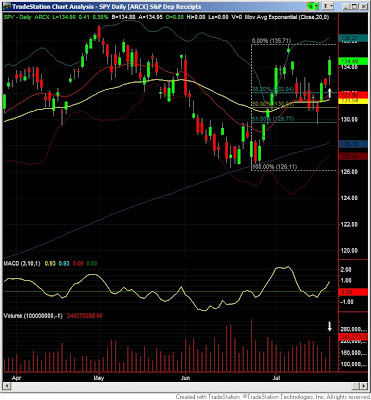 After 3 days of progressively lower volume rally market continued higher but this time on higher volume. Intra-day majority of volume was concentrated in the first half of the day and 134.75 was a significant level of resistance which market couldn't cross. Today's close is 2% from the current bull market high of 137.18.
How the price reacts around the previous swing high of 135.71 will determine the direction. From the current trend it appears that a breakout is imminent, but anything can happen.
Posted by Shuaib Arshad at 12:50 AM No comments: 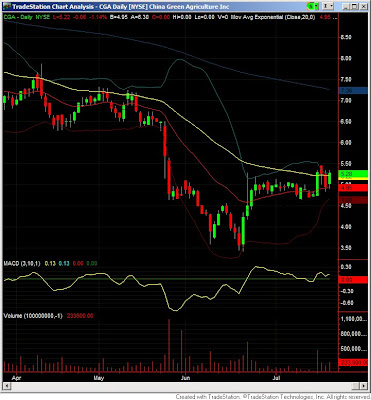 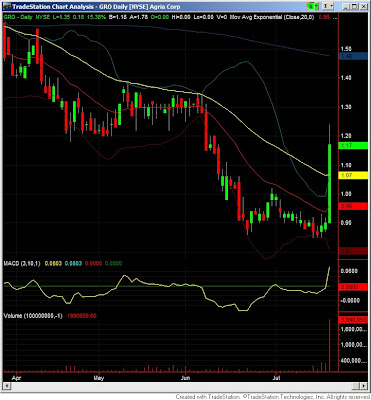 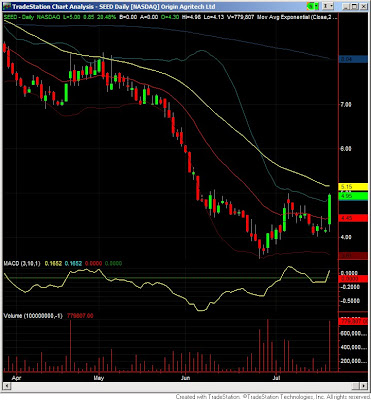 However, they are still trading way below 200 day SMA.
Posted by Shuaib Arshad at 12:41 AM No comments: 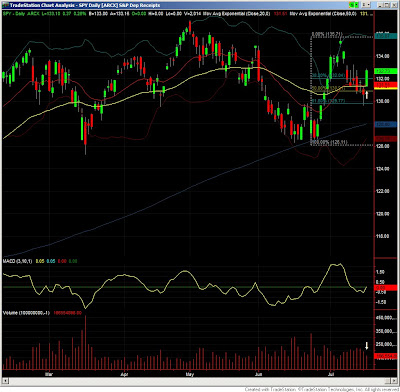 As I mentioned yesterday, a lower volume hammer was not that strong a signal of start of a sustainable rally but today we got a gap up and the market closed near the highs of the day. Volume on SPY was a bit lower than yesterday, again not supportive of a rally but it was higher on QQQ. S&P futures including the overnight session also printed a bullish engulfing candle and that too on lower volume. So, there is a bit of divergence between the volumes of these 2 indices but one such day doesn't mean anything. Even if we see this situation on a number of days I don't know what to conclude from it. So, for now the path of least resistance is up until there is evidence otherwise.
Previously my opinion was that due to summer time, we might not see a breakout of the overall market from the current trading range before start of September. But considering that a number of leading stocks are forming bases and few have just broken out, it is quite possible that we see a breakout much sooner than start of September.
Disclaimer: No position in SPY, QQQ or ES.
Posted by Shuaib Arshad at 1:42 AM No comments: 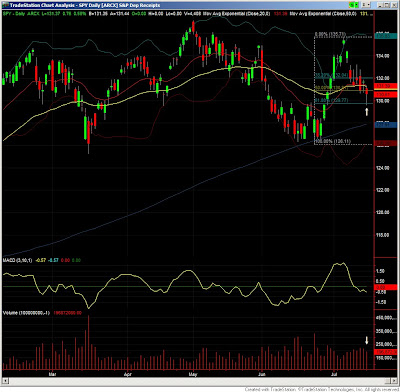 After a long break, I am attempting to resume blogging about markets and trading with hopefully more insightful comments.
So, during my today's read of blogs a number of traders have pointed to the hammer candle in SPY, which has formed in one of the support zones. Although it is a positive sign, I do see one problem and that is lower volume. In my experience lower volume hammers rarely kick-off a rally. However, a bullish engulfing candle on higher volume tomorrow could confirm start of an up move. Or if price decides to stay in or close to this hammer's range could signal accumulation. Lets see what tomorrow brings.
Posted by Shuaib Arshad at 2:02 AM No comments:

This snapshot shows the basic setup that I try to take advantage of. Right now my trading is discretionary but I try to stay close to my trading rules, though more often than not I open position before the right time.

Disclosure: Long position in USD/JPY
Posted by Shuaib Arshad at 3:43 AM No comments: